"Few places in North America offer the physical and biological complexity of the Klamath-Siskiyou Bioregion. It is one of those places that can evoke breathtaking awe, humility, and never-ending curiosity.

The Klamaths are a patchwork of folded, faulted, intruded, metamorphosed rocks, where continental and oceanic plates collided, resulting in a richly embellished landscape of diverse geological formations. The oceanic floor makes a different kind of bedrock which makes a different kind of soil, high in metals and low in calcium. These unique soils required special plant adaptations, creating endemic flora found nowhere else on Earth.

The botanical and animal diversity of the Klamath-Siskiyou Bioregion earned it recognition by the World Wildlife Fund as one of the three top conifer biomes in the world. Current controversy regarding mining and timber harvesting has brought many of our ways of perceiving the human/nature interaction to question." -- Art R. Kruckeberg and Frank A. Lang, Siskiyou Field Institute

"As we shift from seeing humans as dominators of nature to seeing ourselves as a keystone species in co-creation with nature, many of our choices will also shift, allowing for a greater field of the possible." – Shaktari Belew

Prior to the arrival of settlers in mid-1800s, Shasta Indians lived in the valley along the creek approximately where Ashland is located.  By the early 1850s, the Donation Land Act brought many white settlers into the Rogue Valley and in conflict with its native people. These often violent clashes continued until 1856.

When gold was discovered near Jacksonville in 1851, an influx of settlers arrived, eventually establishing a lumber mill and fledgling town at Ashland Creek. The community grew during the 1860s and 1870s.  In 1872 the Ashland Academy was founded, eventually becoming Southern Oregon University.

From 1887 to 1926, Ashland thrived on the primary rail line between Portland, Oregon and San Francisco.   In 1908, the Women's Civic Improvement Club petitioned for the creation of a park at Ashland Creek.  It was eventually named Lithia Park, and was designed by landscape architect John McLaren, famous for his design of San Francisco’s Golden Gate Park.

In 1935, Angus L. Bowmer arranged the first performances of what would become the Oregon Shakespeare Festival. The festival grew during the 1900s, and is now the oldest Shakespear Festival in the United States.

Recent historic growth can be tracked viewing this animated map.

Ashland is well-known for its annual Oregon Shakespeare Festival, which brings thousands of visitors to the city every year. The festival has grown from a summer outdoor festival in the 1930s to a season which stretches from February through October, incorporating Shakespeare and non-Shakespearean plays in repertory at three theaters. OSF sells more tickets to more performances of more plays than any other theater in the country. In a typical year, OSF sells more than 350,000 tickets and attracts about 100,000 tourists.

The National Fish and Wildlife Forensics Laboratory, located in Ashland, is the world's only crime lab dedicated to wildlife, and serves law enforcement worldwide.

Lithia Park is a 100 acre (0.4 km²) park extending from the center of town ("The Plaza") up Ashland Creek to the foothills of Mount Ashland. It includes two ponds, a Japanese garden, tennis courts, two public greens, a bandshell (outdoor stage) and miles of hiking trails.   The Ashland City Band is the oldest continuous city band in the United States, having formed as the Ashland Brass Band in 1876. 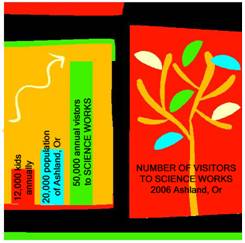 Just 4 years old, Science Works is a perfect example of the community coming together and creating a resource center for children of all ages.  Modeled after the Exploratorium in San Francisco, Science Works hosts 50,000 visitors each year.  In a town of barely 20,000 – that is no small feat.  Thriv’In and Science Works intend to collaborate closely as we provide our community with leading edge research and hands-on learning.

The Ashland School District oversees three elementary schools, one middle school and one high school.  In 2001, Offspring Magazine named Ashland public schools as one of the top 100 school districts in the country.  In 2004, School Match awarded the District its What Parents Want Award, an honor earned by only 16% of all schools in the United States.  Both organizations noted that Ashland schools are consistently strong on state and national assessments, have a competitive pay scale for teaching staff, are above average on instructional expenditures per student, and are known for small class size.

Unique to the Ashland area, is a focus on the environment, demonstrated by the presence of two specialized schools highlighted below. Although they serve a small handful of students each year, these schools indicate the strong inclination within the entire community to support programs like the Thrivability Institute. We envision our programs as a deeply integrated resource for all area schools.

Wilderness Charter School  - The mission of the Wilderness Charter School is to study and practice community, self-reliance, and ecological connection with the intention of creating a sustainable future.  Wilderness School students start and end the year with an extended wilderness experience. These trips are designed to bring students and teachers together as a community, to teach basic backpacking skills, first aid, botany, and geology, and to help prepare students to meet the challenges of the coming year. 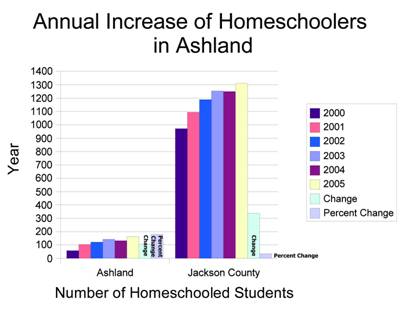 John Muir School - John Muir School opened its doors in September of 2006.  A magnate school focusing on natural science and arts, John Muir serves 75 children in kindergarten through eighth grade. Children achieve the standards and acquire the knowledge mandated by the State of Oregon through experiential based education including workshops, peer collaboration, independent investigation and concept construction.

Southern Oregon University (SOU) - a public four-year university, offers programs in science and liberal arts. It has an enrollment of approximately 5000 students, and offers graduate programs in business, education, arts, and sciences.

Rogue Community College (RCC) - By the end of the 2004-05 school year, approximately 14,380 students had enrolled at RCC. That number represented the full-time equivalent (FTE) of 4,212 students. Based on regional population demographics, continued growth is expected. http://www.ashlandchamber.com/Page.asp?NavID=325 060905

Ashland has been selected by ICF as one of the top 21 finalists from around the world with the potential to become one of the Forum's Top Seven Intelligent Communities of the Year 2007.

Ashland is currently undergoing a large demographic change as more and more retirees relocate to the Rogue Valley. Housing costs have risen drastically, pricing many families out of the Ashland market. In the past few years, Ashland has had to close two of its elementary schools due to under enrollment.  At the same time home schooled students have increased dramatically.  (See diagram above.)

Jackson County, Oregon had a population that was estimated at 195,322 in 2005. The total population has increased sharply, from the population in the year 2000 of 181,866. This growth signifies an increase of 7.4 percent. Jackson ranks 5 of 36 counties in terms of population growth in Oregon and the county ranks 261 of 3,141 counties when calculating the total change in county population across the US.

Income from tourism comprises a significant portion of Ashland's economy.  Visitors and participants to Thriv’In will naturally contribute to that economic base.  Many hotels, bed and breakfasts, and even private homes serve tourist housing needs; while Ashland’s unusually high number of gourmet restaurants contribute to their gustatory pleasure.

Tourism has been a stabilizing influence on Ashland’s economic health and sets it apart from other Oregon towns. Over 358,427 visitors come to Ashland annually. We have experienced a shift in our market area that has created a regional market from Northern California to Eugene. Highly educated on the whole, over 60% of our visitors hold either Bachelors, Graduate or Professional degrees. Visitors’ median age is 40-49, with 42.3% of them over 50 years old. Visitors are taking shorter, more frequent vacations, couples are traveling without children, most come from California, Oregon and Washington, and over 80% are repeat visitors.

Ashland's city-owned electronic company moved to improve the city's Broadband Internet access in 1999 by creating the Ashland Fiber Network (AFN), which built a $8.5 million fiber optic ring inside the city boundaries. This supports 3,700 cable modem customers (an estimated three-quarters of the market).  This level of foresight and dedication to quality of life is unusual for such a small town, but is simply another example of the fresh thinking inherent in the Ashland approach to life.

CULTURAL CREATIVES and LOHAS in Ashland and Surrounds

As of the year 2000, there are 50 million adults in the United States who have the worldview, values and lifestyle of the Cultural Creatives. (There are probably about 80-90 million Cultural Creatives in the European Union as well.) There seem to be several pivotal CC and LOHAS-oriented cities within the US.  One of the smallest yet consistently mentioned seems to be Ashland, Oregon. 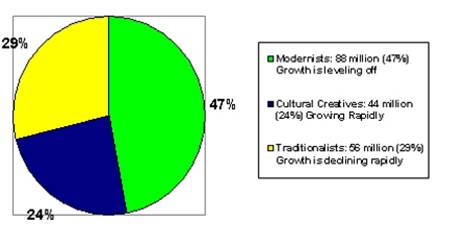 A perfect example of this is the number of local volunteers at Mediation Works, a non-profit dedicated to providing accessible and peaceful means of conflict resolution to the community .  Not only have 101 people been trained to act as community mediators (on their own time and without pay), but 72 were actively used in 2005, providing 5,228 hours of quality mediation.

"As Founder and Publisher of The Green Book -- Directory of Business With Heart for 13 years, I have seen many changes, especially in the growing numbers of our faithful readers and the increase of conscious small business owners. Some call us the "Cultural Creatives." Labels aside, consumers and business owners are recognizing the desire to deal with like-minded folks who value the old-fashioned values of honesty, craftsmanship, and community involvement. We seek a business for whom "service and integrity" are words to live by and not just "marketing hype."--Larissa, Owner/Publisher

“Ashland is a pretty, small town, filled with passionate people. This community fosters curiosity, creativity and communication. Our school district is rated one of the top 100 districts in the country. Walk down the street and look people in the eye or communicate with someone half a world away with AFN, high speed internet access. Our progressive and active business community cultivates big city amenities which locals and visitors enjoy alike. Ashland...Come really live your life.”

Shop N' Kart and the Ashland Food Co-op carry a huge selection of certified organic and Fair Trade items. But they are not the only ones.  Many local grocery stores carry organic items too. The rousing success of the Growers' Market (a weekly event in Ashland and two nearby communities), featuring organic products only reinforces the perception that Ashland is, indeed, a prime location for the Thrivability Institute.

Ashland endorses the Valdez Priciples
By endorsing the Valdez Principles in 1990, the City of Ashland proclaimed its intention to uphold the sanctity of the commons. Thriv’In is the next logical step in fulfilling that ratification, and fits in beautifully with the stated intent of Ashland’s governmental stance regarding the environment.

By endorsing these Principles, we publicly affirm our belief that the City of Ashland, Oregon, has a direct responsibility for the environment. We believe that we must conduct the public's business as responsible stewards of the environment and seek goals only in a manner that leaves the Earth healthy and safe. We believe that the City must not compromise the ability of future generations to sustain their needs.

We recognize this to be a long-term commitment to update our practices continually in light of advances in technology and new understandings in health and environmental science. We intend to make consistent, measurable progress toward the ideal that these principles describe, and to apply them wherever we operate, in a manner consistent with our other obligations under law.

We will conduct and make public an annual self-evaluation of our progress in implementing these Principles and in complying with all applicable laws and regulations.
Endorsed by the Ashland City Council - May 15, 1990.