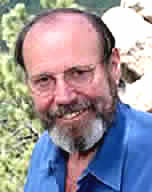 Bernard Lietaer is the author of numerous books on money and finances, including “The Future of Money," and the soon-to-be-published "Of Human Wealth."  He has been involved in the world of money systems for more than 25 years, and his experience in monetary matters ranges from multinational corporations to developing countries.  He co-designed and implemented the convergence mechanism to the single European currency system (the Euro), and served as president of the Electronic Payment System in his nati"ve Belgium.  He also co-founded one of the largest and most successful currency funds.  Formerly professor of international finance at the University of Louvain, Lietaer is currently a fellow at the Center for Sustainable Resources at the University of California, Berkeley.

Mr. Lietaer presented our inaugural THRIV'IN DIALOGUE, entitled, THE MYSTERY OF MONEY, on Feb 3rd, 2007.  In it he explored the deeper archetypal implications of our money and how to redesign our economic system to revitalize a thriving society, understand the inherent flaws of our conventional currency system, the benefits of creating a complementary currency, and ways to effect lasting social change. 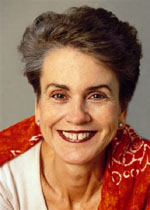 Author of Diet for a Small Planet and Democracy's Edge, Frances Moore Lappé’s books and organizations continue to inspire co-creative systemic re-evaluation of our cultural, structural, and personal choices, constantly re-declaring WHO WE ARE WILLING TO BE.

Frances Moore Lappé’s books have been used in a broad array of courses in hundreds of colleges and universities and in more than 50 countries. They have been translated into over a dozen languages. Lappé’s life and work have been featured in O Magazine, Glamour, People Magazine, The Boston Globe Magazine, The Utne Reader, Vegetarian Times, Orion Magazine, and many other publications. Lappé’s articles have appeared in publications as diverse as The New York Times, Los Angeles Times, Readers' Digest, Christian Century, Chemistry, Le Monde Diplomatique, National Civic Review, Tikkun, and Harper’s. In the summer of 2004 both Hope’s Edge and You Have the Power ranked in the top 20 among Amazon’s best sellers in the category of philosophy and ethics.  She has been on PBS with Bill Moyers, the Today Show, CBS Radio, and National Public Radio’s Weekend Edition. Lappé’s work has been featured in several television documentaries.

Lappé has received 17 honorary doctorates from distinguished institutions, including the University of Michigan, Kenyon College, Allegheny College, and Lewis and Clark College.  In 1987 in Sweden, Lappé became the fourth American to receive the Right Livelihood Award, sometimes called the “Alternative Nobel,” for her “vision and work healing our planet and uplifting humanity.”

On Feb 28th, 2007 Lappe' presented an inspiring talk to a packed audience in Ashland, followed by a Thrivability Institute sponsored community party celebrating our community connections.  We savored local organic food and libations, met with regional sustainable businesses and those pioneering new sustainable technologies, and focused our combined attention on co-creatively mind-mapping our next steps as an evolving interdependent community.

She will present her latest book, Getting A Grip, to the Ashland Community on March 10th, 2008.